10 Facts you don’t know about Audi 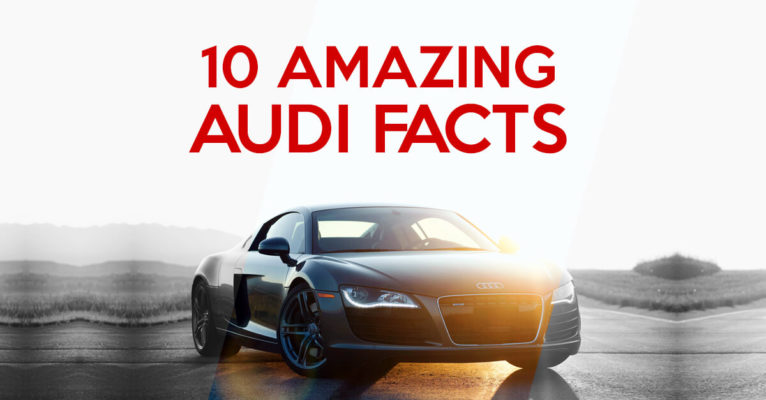 We have put together 10 amazing facts you don’t know about Audi that are sure to impress you!

Audi has always been the forerunner when it comes to luxury car manufacturing and only a few can match the sheer brilliance with which Audi cars are built. Been here for more than 100 years, the German car manufacturer knows a thing or two about using cutting edge technology, strong design language and luxury at its best. What’s more, Audi has been successful in racing front too and has an impeccable racing heritage.

August Horch, the founder of Audi was a young German engineer who started working as a blacksmith. After receiving his degree in engineering, he worked in shipbuilding before working under Karl Benz, founder of the Mercedes-Benz car manufacturing company. Horch worked under Benz for 3 years before starting his own venture.

After parting ways with A. Horch and Cie. in 1899, Horch decided to form another company and named it August Horch Automobilwerke GmbH. But dues to legal issues and copyright infringement issues, Horch was asked to drop ‘Horch’ from the company name. He ultimately used ‘Audi’ as the final name, which is the Latinization of Horch and means ‘listen’ in Latin.

4. The four rings in the Audi logo represent the four companies of the Auto Union

While the Horch automobile company and Horch himself, started on a wrong note, they decided to mend ways sometime in 1932. Audi decided to form the Auto Union with Horch company, DKW and Wandered. Each company got their own market segment, Horch for high-end luxury cars, Audi for deluxe cars, Wanderer stuck with standard mid-size cars and DKW decided to go with small cars and motorcycles. And hence four rings depict the Auto Union of 4 companies.

5. Audi has been conducting crash tests for over 75 years now

You might be thinking that crash testing is a relatively new development with all the dummies, cameras and sensors in place. But that’s not true! Audi has been doing crash testing for ages now, precisely 75 years and used to demonstrate safety by rolling down an Audi F7 from a hill.

As mentioned above, Mercedes and Audi have always been entangled in rivalry on and off the track. Back in 1938, just before WW II, the Auto Union took the help of Ferdinand Porsche to design the fastest track car. The alliance came up with a 560 horsepower producing V16 beast called the Auto Union Type C. Thanks to the rear-mounted engine and enhanced handling, Type C managed to clock 430 kmph on the Autobahn. In your face Bugatti!

7. Modern rallying was revolutionized by the Audi’s Quattro four-wheel system

Back in 1980s, when the World Rally Championship was contemplating options to integrate a four-wheel-drive system into race cars, Audi was releasing Quattro. Today we all know how Quattro changed the image of Audi as a capable SUV, but it was the numerous rally wins between 1981 to 1986 that actually pushed Quattro to an extent that WRC took note of it and allowed all-wheel drive cars into racing. Audi went on to win the driver’s championship in 1983 and 84 and also won the tough Pikes Peak Hill Climb from 1982-87.

8. Audi is the master of Le Mans and won 24-hours with both Diesel and Hybrid powered cars

Audi is the master of Le Mans and has won the championship an incredible 13 times. Audi was so strong in this form of racing that hardly any other manufacturer could challenge the supremacy of the German manufacturer, thanks to the gasoline R8 racer. As if it was not enough, Audi decided to prove their diesel prowess by winning the 2006 Le Mans in a turbocharged V10 R10 TDI. And then Audi went one step ahead to win the Le Mans 2012 in an R18 e-Tron Quattro. Insane!

9. “Shelly”, the fully autonomous Audi has scaled Pikes Peak with no driver

For all those who don’t know, Pikes Peak is an immensely tough and dangerous place to do racing and many race cars are now just a pile of scrap at the bottom of the mountain. While the autonomous technology is still in its nascent stage, Audi decided to climb Pikes Peak in their fully autonomous car named “Shelly”. As impossible as it may sound, the high-tech GPC enabled Audi TTS scaled the mountain without any trouble and without any driver, just 19 minutes short of the world record set by the ace rally driver Sebastian Loeb. Audi named this car after the first woman WRC champion and Audi’s rally driver Michele Mouton.

10. Audi is planning to send a Quattro powered Lunar Rover on Moon

Google is conducting a competition called Lunar XPRIZE with prize money of R427 Million. The competition invites scientists to build a Lunar Rover that can run on the surface of the moon for 500 meters and broadcast a high-definition live feed from its surface. Audi has partnered with a team of scientists in Germany to build a Lunar Rover powered by Quattro and named it the ‘Audi Lunar Quattro’. We hope Audi wins the competition!

Audi has always been the forerunner when it comes to luxury car manufacturing and only a few can match the sheer brilliance with which Audi cars are built. Been here for more than 100 years, the German car manufacturer knows a thing or two about using cutting edge technology, strong design language and luxury at its best. What’s more, Audi has been successful in racing front too and has an impeccable racing heritage.

Best of all if you own an Audi and need auto body repair work, you are in luck because we are an Audi Approved Motor Body Repairer.

You also have peace of mind knowing we are Insurance approved!

Voted the best automotive repair shop in KwaZulu Natal. Our staff are highly qualified and experienced. Together with our state-of-the-art equipment, we are able to ensure that you and your vehicle are in good hands. We specialise in complex and intricate repairs, spray painting and polishing of the highest quality.

Giorgio Express
We use cookies on our website to give you the most relevant experience by remembering your preferences and repeat visits. By clicking “Accept All”, you consent to the use of ALL the cookies. However, you may visit "Cookie Settings" to provide a controlled consent.
Cookie SettingsAccept All
Manage consent

This website uses cookies to improve your experience while you navigate through the website. Out of these, the cookies that are categorized as necessary are stored on your browser as they are essential for the working of basic functionalities of the website. We also use third-party cookies that help us analyze and understand how you use this website. These cookies will be stored in your browser only with your consent. You also have the option to opt-out of these cookies. But opting out of some of these cookies may affect your browsing experience.
Necessary Always Enabled
Necessary cookies are absolutely essential for the website to function properly. These cookies ensure basic functionalities and security features of the website, anonymously.
Functional
Functional cookies help to perform certain functionalities like sharing the content of the website on social media platforms, collect feedbacks, and other third-party features.
Performance
Performance cookies are used to understand and analyze the key performance indexes of the website which helps in delivering a better user experience for the visitors.
Analytics
Analytical cookies are used to understand how visitors interact with the website. These cookies help provide information on metrics the number of visitors, bounce rate, traffic source, etc.
Advertisement
Advertisement cookies are used to provide visitors with relevant ads and marketing campaigns. These cookies track visitors across websites and collect information to provide customized ads.
Others
Other uncategorized cookies are those that are being analyzed and have not been classified into a category as yet.
SAVE & ACCEPT

Open WhatsApp chat
1
Hi! Welcome to our 24 HOUR LINE.
Please let us know how we can help you?