Unusual Auto Races Around the World 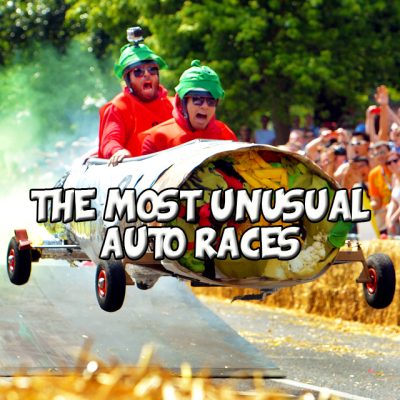 In this count down we take a look at the 5 most unusual auto races around the world. You are definitely going to want to put on your seatbelt for this one!

Auto racing is a serious sport. Big prizes and big reputations are at stake, not to mention the lives of the racers when a car spins out in a turn. High-speed driving and 24-hour endurance spectacles are no laughing matter, right?

Well, sometimes they are. Not all auto races are grim and humorless. Some races are just…well, strange.

From outlaw rallies that zoom from continent to continent to zany television competitions featuring ambulances and school buses, we’re going to look at some of the weirdest, most unusual auto races anyone has ever popped a clutch at. Did you know that there’s a race that actually encourages drivers to stop at brewpubs? Or one that features a 3,700-mile (5,955-kilometer) leg that goes from Stockholm to Boston? But let’s not get ahead of ourselves. 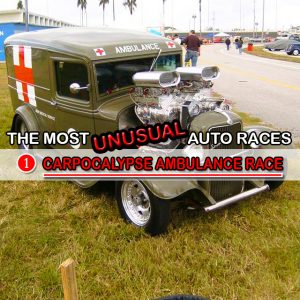 The Spike-TV program Carpocalypse, which was reportedly inspired by the Atari video game, “Test Drive: Eve of Destruction,” was a smorgasbord of bizarro auto racing concepts, from a school bus figure-8 race to a blindfolded trailer race. We’ll throw a dart at the entire Carpocalypse episode guide and talk about…the ambulance chain race.

What’s a chain race? It’s a race between vehicles towing other vehicles behind them on chains. Why would anybody want to race with another vehicle chained behind them? For the same reason anybody does anything — because they can. In the ambulance chain race, ambulances race while towing cars. It’s as simple (and wacky) as that. The results of the race, which was held on a circular track, were torn-off bumpers and towed cars spinning out behind ambulances. After all, is there a safer place to spin-out than behind an ambulance? 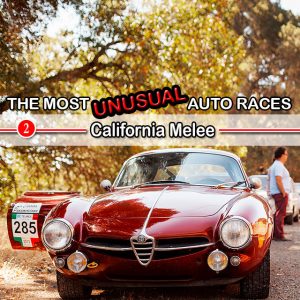 The Mille Miglia was an Italian endurance race back in the days before and after World War II, where cars weren’t expected to go fast so much as they were expected to be in it for the long haul, traveling for 16 hours or more over an open road track that was roughly 1,000 miles (1,609 kilometers) in length. That’s not particularly unusual. More unusual is the California Mille. Taking the Mille Miglia as its inspiration, cars running the California Mille wind their way through California wine country, pausing for regulation stops at resort hotels and wineries. At the very least you have to wonder how the participants stay under the legal alcohol limit for the entire 1,000 miles (1,609 kilometers).

But even more unusual still is the California Melee, an outright parody of the California Mille, where the cars are all pre-1975 sports and touring cars and the pit stops are at brewpubs and motels. Call it the Mille Miglia for the rest of us. The entrance fee is low and you’ve got three days to putter along 750 miles (1,207 kilometers). Race? Some people would call that a road trip.

Remember the Soap Box Derby? Maybe when you were a kid you wanted to be in it. While some of the early vehicles at what’s now known as the All-American Soap Box Derby may have been made out of actual soapboxes all that truly mattered was that they were gravity propelled and used standardized wheels. Otherwise, participants could build any kind of engineless car they wanted and race it downhill for prizes.

OK, so the soapbox derby isn’t really unusual enough for this list. But the Red Bull Soapbox Race, which emphasizes not just velocity but outside-the-box (and off-the-wall) creativity, really is. “Cars” from past races have been in the shape of a piano, a giant cob of corn and — you’re forgiven if you’re having trouble imagining this one — the Golden Gate Bridge. Technically, of course, this isn’t an auto race because the vehicles aren’t self-propelled. But when the race is this entertaining, does anyone care?

LeMans, LeMons — get it? While the actual 24 Hours of LeMans sports car race, held annually in the eponymous French city, features real racing cars that have been tuned and engineered within an inch of their lives, the 24 Hours of LeMons race features real, well, lemons. Pay more than $500 for your car and you won’t be allowed on the track. Held several times a year at various race tracks across the United States, the organizers of this 24-hour endurance race are serious about only allowing clunkers onto the track. If they find out you paid more than $500 for your car, including any modifications you may have had done in preparation for the race, they’ll dock you a lap for every extra 10 bucks. Other penalties are determined by spinning the Wheel of Misfortune. (Shades of Mad Max: Beyond Thunderdome!)

Oh, yes — halfway through the race the participants vote on one participating car to be crushed on the spot. So whatever you do, don’t bring your grandmother’s prized 1972 Dodge Dart to this event!

Remember the Cannonball Run? No, not the old movie with Burt Reynolds, but the actual race. It was a cross-country car rally (full name: the Cannonball Baker Sea-To-Shining-Sea Memorial Trophy Dash) of dubious legality that ran from New York City to Redondo Beach, Calif., on four occasions between 1971 and 1979. The real Cannonball Run has faded into outlaw racing history, but the tradition it started is upheld today by the Gumball 3000, a high-end car rally that’s been run annually between various locations since 1999.

How various? Well, the 2010 Gumball started in London, wound its way through much of Europe, and ended in New York City, which certainly qualifies it as unusual if not impossible. (The drivers and their cars were flown from Stockholm to Boston.) Other Gumballs have gone from New York to the Playboy Mansion in Los Angeles and from the Eiffel Tower in Paris to the Cannes Film Festival in the south of France — not a very long trip until you consider that the route crossed the Mediterranean and passed through North Africa on its way to the finish line.

Glamorous locations, expensive cars, outlaw racing — and you can be a part of it for only R500 000. You’re probably pulling out your checkbook right now.

Giorgio Express Auto Body Repairs is one of the most sophisticated panel shops in KwaZulu Natal. Our staff are highly qualified and experienced. Together with our state-of-the-art equipment, we are able to ensure that you and your vehicle are in good hands. We specialise in complex and intricate repairs, spray painting and polishing of a highest quality.

For more information on our services and accreditations please contact us (039) 317 3534 | marco@giorgioexpress.co.za